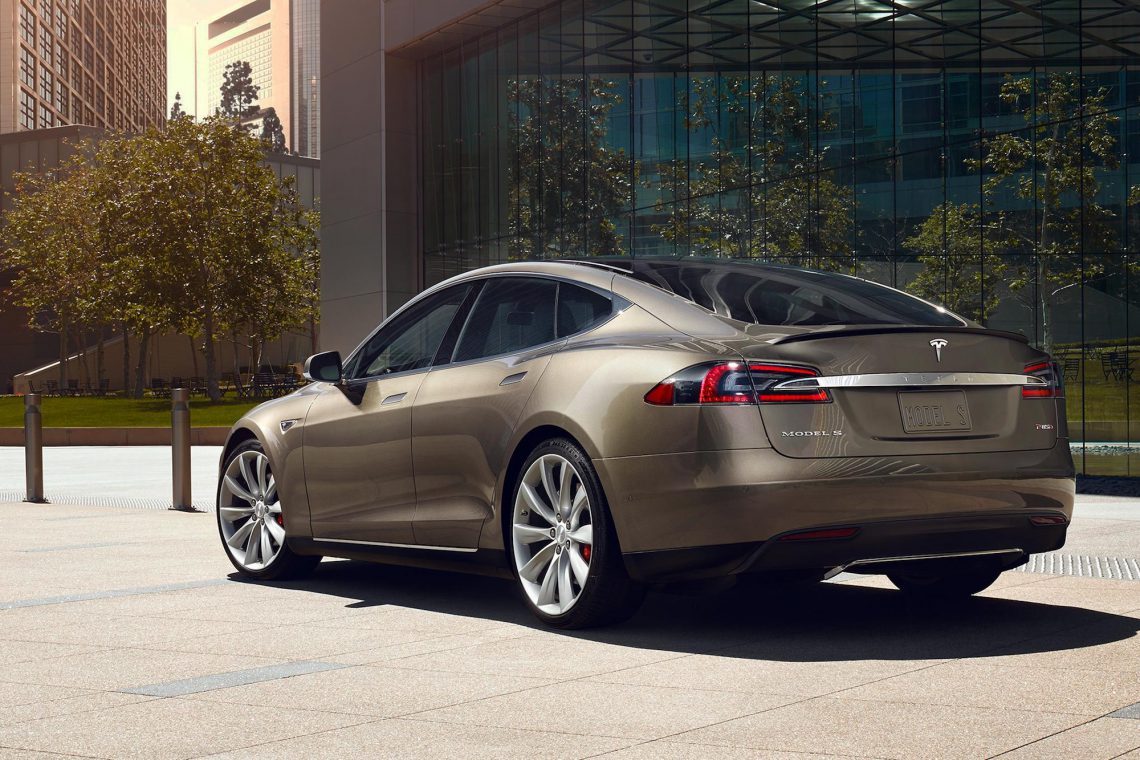 In this blog post I’d like to talk about a comparison I was able to make among different Tesla Model S revisions. The first time I had ever driven a Model S was at a test drive at Tesla’s Munich Store. This was a late 2015 Model S P90DL with the old fascia, but the new seats and autopilot hardware. My second drive was the test drive of my now current mid-2014 Tesla Model S P85. Now when I took my P85 to Tesla’s Service Center, I was offered a loaner vehicle – again a late 2015 Model S P90DL. There’s always a difference when owning a car or getting a loaner vehicle for a few days versus a short test-drive of a few hours. This blog post basically compares the experience between my own mid-2014 P85 and the late 2015 P90DL loaner vehicle I had for two days. My 2014 Model S has already improved much over the first models ever to be shipped. While I recently had a few issues that had to be addressed, I hardly find a difference in build quality. While the newer vehicle provides such an astonishing high level of quality and functionality, the differences to the older Model S are very limited. Most noticeable is the way the old controls feel haptically compared to the newer ones. Being used from a Mercedes-Benz E class, the new turn signal and speedometer levers are stiffer, more precise to touch and operate, and the previous generation of levers are just more chunky and positioned differently. I like the newer ones, which come with the Autopilot hardware package, better, but it’s not an issue of quality but improvement of product design. On the exterior, the clearances, or gaps, between body parts are to a rather high level in general. While not being on par with a BMW or Mercedes-Benz, both of which are known for providing one of the highest build qualities in terms of perfect gaps, both the 2014 and late 2015 Model S are excellent for North American standards and among the better one’s world wide. Nothing really feels flimsy in the car, neither old nor new, which is a good statement in terms of build quality. The steering wheel is of course another aspect that strongly influences the experience you have with the vehicle, and both revisions have the same touch and feel to it, but to me it seemed that the newer vehicle has a stronger dynamic adjustment of the steering to wheel ratio than the old P85. Brakes on the other hand feel very similar, if not even identical, on both vehicles. Another aspect is the noise level of both vehicles and the way load changes are handled. With the dual or triple motor option of the newer Tesla Model S revisions, the interior sound level, especially when accelerating or decelerating, is higher compared to a pure single-motor, rear-wheel driven Model S. With another drive unit up front that is also much closer to the driver, it is simply just more audible than the electric whine coming from a motor all the way in the back. It also seems that the dual-motor variant has a more noticeable and much stronger effect when the load changes from power output to power input. The newer vehicle also seemed to lift and drop more noticeable when changing loads of the power train. Another difference I noticed was with the new Recaro-based sporty seats that have been offered as of lately. While they provide a much stronger side support, they are also much stiffer and harder in general, meaning that the seats are less likely to adapt to your body shape than the original seats. Some hate the old ones, others think they are quite comfortable – but the new seats really just make the vehicle feel more sporty and stiff. Of course, I wouldn’t mind having them, but then again I wouldn’t really want to change from the old ones either at my own cost. The hill-assist mode, which is the brake system self-applying when you stop at a hill, is now also happening at level surface in the newer Model S. This lets you keep your foot of the brake while waiting for the traffic light to turn green, for example. Not a great difference, just minute, but it is noticeable. And one last difference that I noticed was the way the cruise control handles the vehicle. With the old Model S, it was a non-intelligent one. You set the speed, it would hold it spot on, go through any corner your throw at it without reducing power. Sure, this could mean a safety issue in some really tight turns, but it works. When you disabled the cruise control, the vehicle would immediately start to apply full regenerative braking, which I usually prevented by applying some pressure on the accelerator pedal first, then disabling cruise control and then taking my foot off the pedal. Works great that way and at some lower speeds or when already in regenerative braking mode, you can just disable it without any strong load change. Now with the newer Tesla Model S, the cruise control from the Autopilot hardware package, it behaves differently. What I noticed first and didn’t like at all was the fact that it reduced power and speed when going around corners. This already happens in turns where you would easily go through without reducing power in dry conditions, so it starts to become a nuisance when you are more of a sporty driver. Secondly, they improved the load change problem when in cruise control and you suddenly disable it with the lever (instead of the brake pedal), resulting in the vehicle to continue at speed and very gradually and slowly reducing the power until it starts regenerative braking. Yes, this was basically just what I had wished for compared to the old Tesla, but it seems to me it has a too long delay. If I disable the cruise control, I want the vehicle to immediately slow down, not a second or two later. This forces you to apply the brakes more often as the vehicle doesn’t manage to stop in time, unless you disable it way ahead of the stop you anticipate, making it harder to rely solely on regenerative braking.

When diving deeper into the UI of the software architecture, you will spot a few differences in design. With the new Autopilot, the vehicle loses it’s center speedometer / powermeter dial, which however can be pulled up through the energy widget on either your left or right side of the dashboard display. The parking sensors now offer a fully-seamless representation of the outside world, while the old sensors just report the distance to objects around the vehicle in multiple arc segments from the sensor. When comparing the P85 and P90DL, the main differences in features are really just limited to the Autopilot feature set, which includes an adaptive cruise control, steering assistant as well as a full parking assistant. The biggest question many of you are probably asking is if it makes sense to buy a used Tesla Model S or if you should just go for a new one instead, but this really all comes down to your budget, the current market situation and personal preference. If you don’t need the Autopilot hardware, a mid to late 2014 Tesla Model S will be a great way to get a share of the absolutely astonishing experience of owning and driving an all-electric automobile by Tesla Motors, Inc. On the other hand, if the Autopilot features are something you are simply electrified by, then you should probably go for a new vehicle instead, which you can currently save 1000$ on, if you are referred by another Tesla owner, like me. (http://ts.la/florian3624 or use the promo code: florian3624) I really enjoyed the opportunity to give the Autopilot another try on the road in actual traffic, but this is another story that should be addressed in a separate blog post sometime in the future. Comparing the early models of the Model S with the latest revision and its new front fascia, which is just a change to the appearance of the vehicle that comes with a new center console in the front, you really only have minor differences that set each revision apart from others. Generally speaking, a Tesla Model S is the same experience throughout its life cycle and shouldn’t be treated as the old Model S and the new Model S. Tesla is not doing what other car manufacturers are doing: releasing a new Model with dramatic changes every specified number of years or even on a yearly basis, but they implement changes to the product as soon as they are ready or required to fix a problem. I truly enjoy and adore my mid-2014 P85 and don’t regret owning it. When the time comes for the Model 3, I will surely be happy to use the Autopilot and have sportier seats, but all options come with a given set of advantages as well as disadvantages.