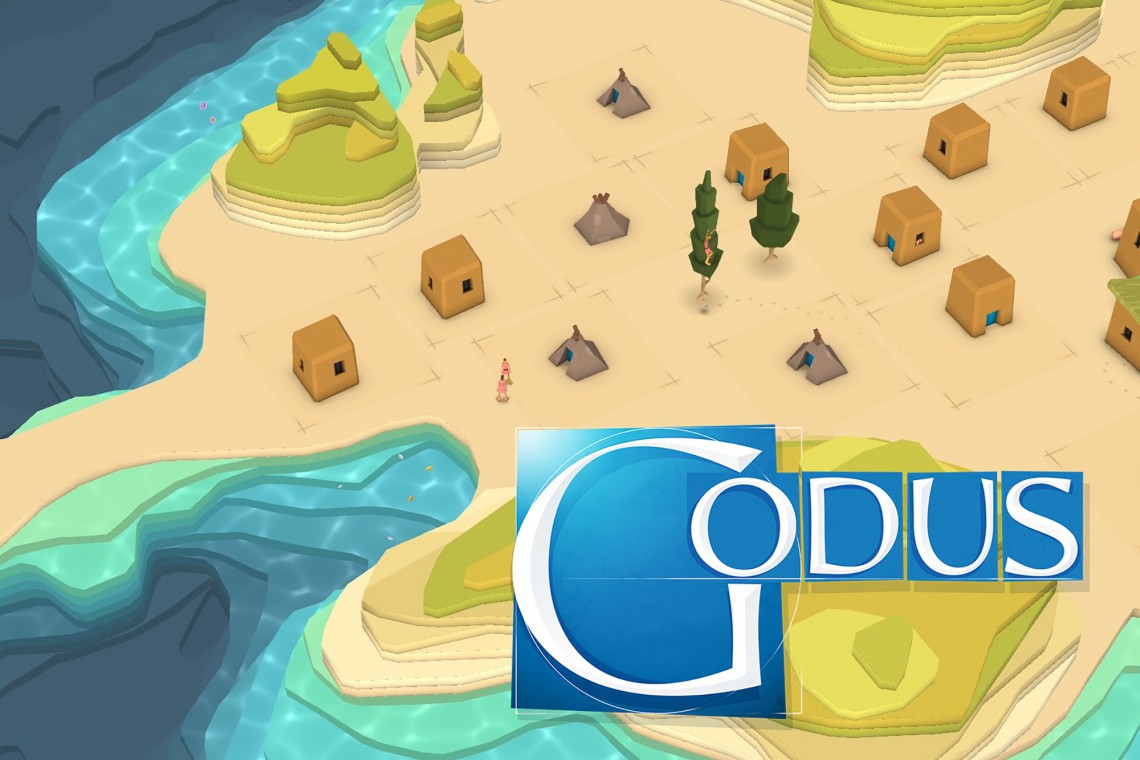 The team of 22cans has devoted their time and effort into creating another game in the genre of god simulations. Unlike the Black & White series it focused on being a modern game – a game that is portable, playable when you have a few minutes to spare on the go and rather simple in terms of graphics, yet brilliantly artistic.

The game starts as expected with the story of two people in need. After having rescued them, a man and a woman, you are to lead them to the promised lands where they would settle, build a house and start their own civilization. Playing the character of a god is still a rather unusual style for games, yet Godus achieves it in such a charming way. Mostly because of the way the interaction with the world is achieved. Rather than being a common three-dimensional world, it is being represented in a 2.5D style with differently colored slices that each represent a different world elevation. Starting in the ocean with blue, it goes up towards a yellow sand layer, green grass layers and then all the way up to darker shades of green for forests, brownish red tones for the mountains and finally white layers for snow. This reminds you a little of the way cube-style games are made up, such as Minecraft, Creativerse and others. To increase the covered area of a layer you drag it horizontally and can adjust it almost seamlessly to your likings. You can add another layer on top by dragging and creating it within the previous layer. You can only go layer by layer up or down. There is no way to skip and adjust multiple layers in a single stroke. While sometimes tedious to carve the exact landscape you have in mind, it is fun to do so.

However, there is more to the game than just landscaping your scenery. You are obliged to take care of your believers and citizens. You shall protect them from hideous champions, cruel tribes, catastrophic natural phenomena and unintentional disasters that you unleashed upon them. Unlike Black & White there do not seem to be pets that you can train and direct through your world. Another great feature is the collectible card element of the game. While reshaping the landscape you will stumble upon chests full of stickers and cards, and completing missions will occasionally reward you with new cards as well. These can unlock new types of buildings, such as a farming settlement, which combines previously built houses into a large housing block and makes space for new farm lands, or teach you new spells such as holy rain or devastating fire. Each card has to be unlocked by the multiple application of stickers.

Your god powers are dependent on belief, which can be acquired by collecting pink bubbles that spawn at an interval on top of your houses or by trading gems for belief cards. You can also collect belief by destroying stones or clearing trees from your scenery. Belief is also required to command your entrusted construction workers to a new job if they are too far away from the construction site, a far away shrine, for example.

Overall this game is a finesse on the mobile platform. Unfortunately, I have not yet had the chance to experience it on a desktop computer. If you want to find out more, please check out Apple’s App Store link: https://itunes.apple.com/de/app/godus/id815181808